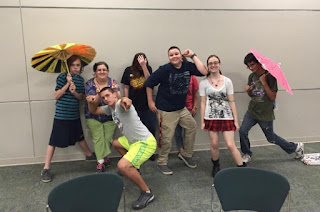 If you've been reading for the Teen Summer Reading Program, you're invited to come to our Teen Lock In after Library hours from 6-11 pm. We'll have games, movies, make our own snacks and lots of prize give aways! Pick up your permission slip at the library and  come ready to have fun!

You may hear the words anime and manga used interchangeably to mean something like “Japanese-style animation.”  But they are actually distinct art forms.  Manga, from the Japanese word for “drawing,” refers to the static graphic narratives that in the U.S. might be referred to as “graphic novels.”  Anime (from animation) is, as the name implies, the moving version of a graphic story on film, either as a movie or a television series.

There are many series that have both anime and manga versions.  Some fans only read the manga; others only watch the anime; but many fans read the manga and watch the anime.  Why would you both read and watch the same series, you may ask.  Aren’t they essentially the same story?  Well, only sometimes.  While there are some anime series that follow the manga very closely, such as Death Note, there are many series that have serious departures from the manga story, or tell a different story altogether.  Some even do both with multiple versions of the anime. Here are some comparisons from the Rogers Public Library collection:

Fullmetal Alchemist has a manga plus two anime series.  The original anime series, simply titled Fullmetal Alchemist, starts out fairly close to the manga, but quickly veers off in an entirely different direction.  There are numerous major characters from the manga who never make an appearance in this anime, and even some of the characters who do appear only have the same name as the manga character, while appearing entirely different and having completely different back stories (Sloth, for example).  There is even a movie that continues the ending of this series and gives what many consider a more satisfactory ending to the story from this particular series.  However, the second anime series, Fullmetal Alchemist: Brotherhood, follows the manga closely, with only minor changes throughout.

Tokyo Ghoul has an anime and a manga version, and while they begin in a similar vein, the anime makes several changes.  The first season of the anime generally follows the manga, although there are some scenes that have small differences, sometimes leaving out something or adding something in that is not there in the manga.  The story arcs are occasionally in a different order in the anime as well. Some characters are introduced earlier in the anime.  However, season two of the anime completely diverges from the manga, going in a different direction and telling a different story.

Black Butler tends to go back and forth between telling the same story in the anime and changing things up completely.  The anime changes several elements of the story and its characters, veering away from the manga version and then returning to it, only to diverge again.

One Piece generally follows the manga. The anime does make some slight changes and adds filler story arcs that are not contained in the manga, but make no major impact to the overall story.

So why do some people read both the manga and watch the anime of the “same” story?  Usually it’s because they love the art and can’t get enough of the characters.  However some people are quite passionate about their preferred format: whether it’s due to plot details, style, mood, or general theme, they’ll insist that their favorite version (either the anime or the manga) is better.  It really comes down to a matter of taste.  Why not see which you prefer?